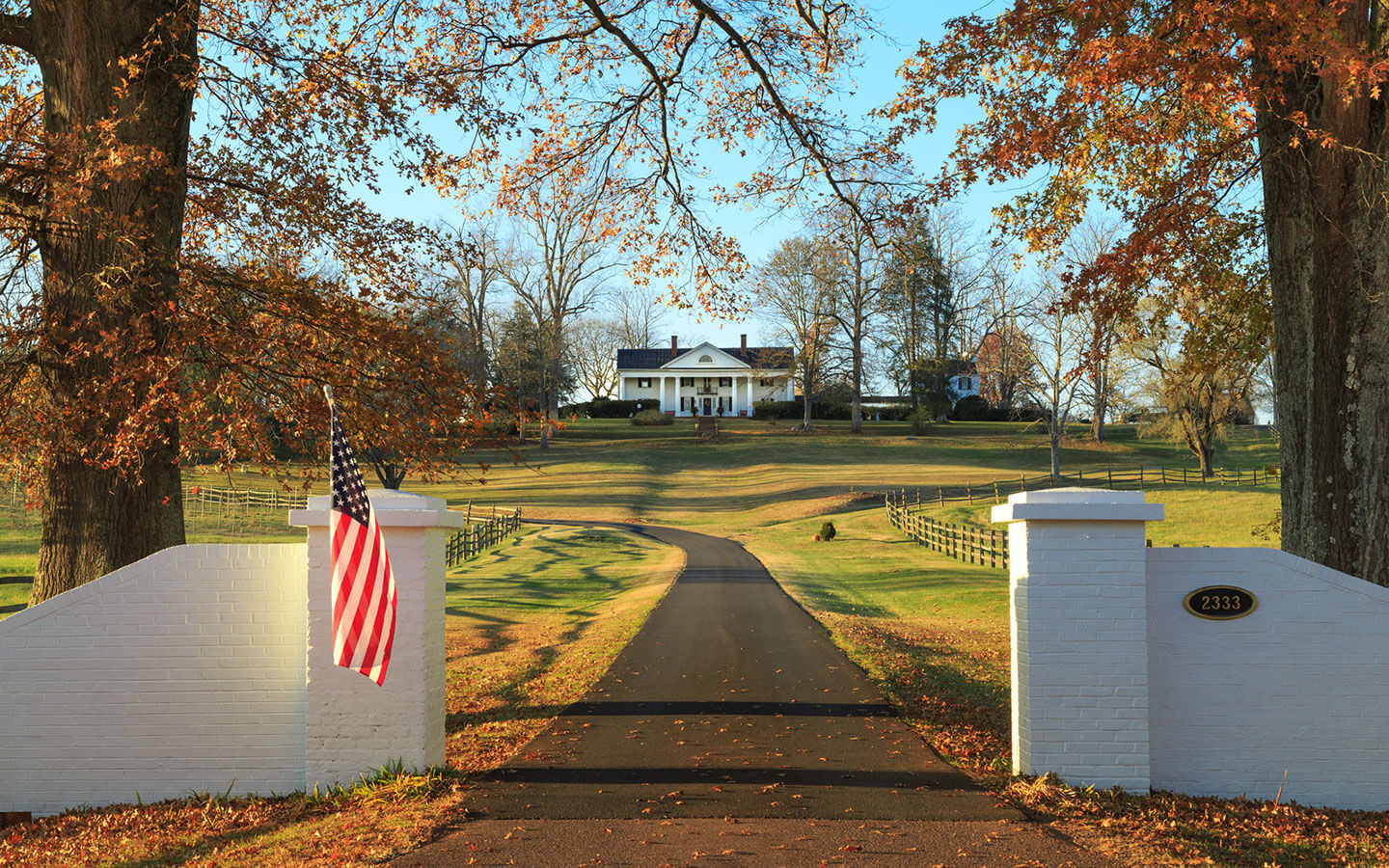 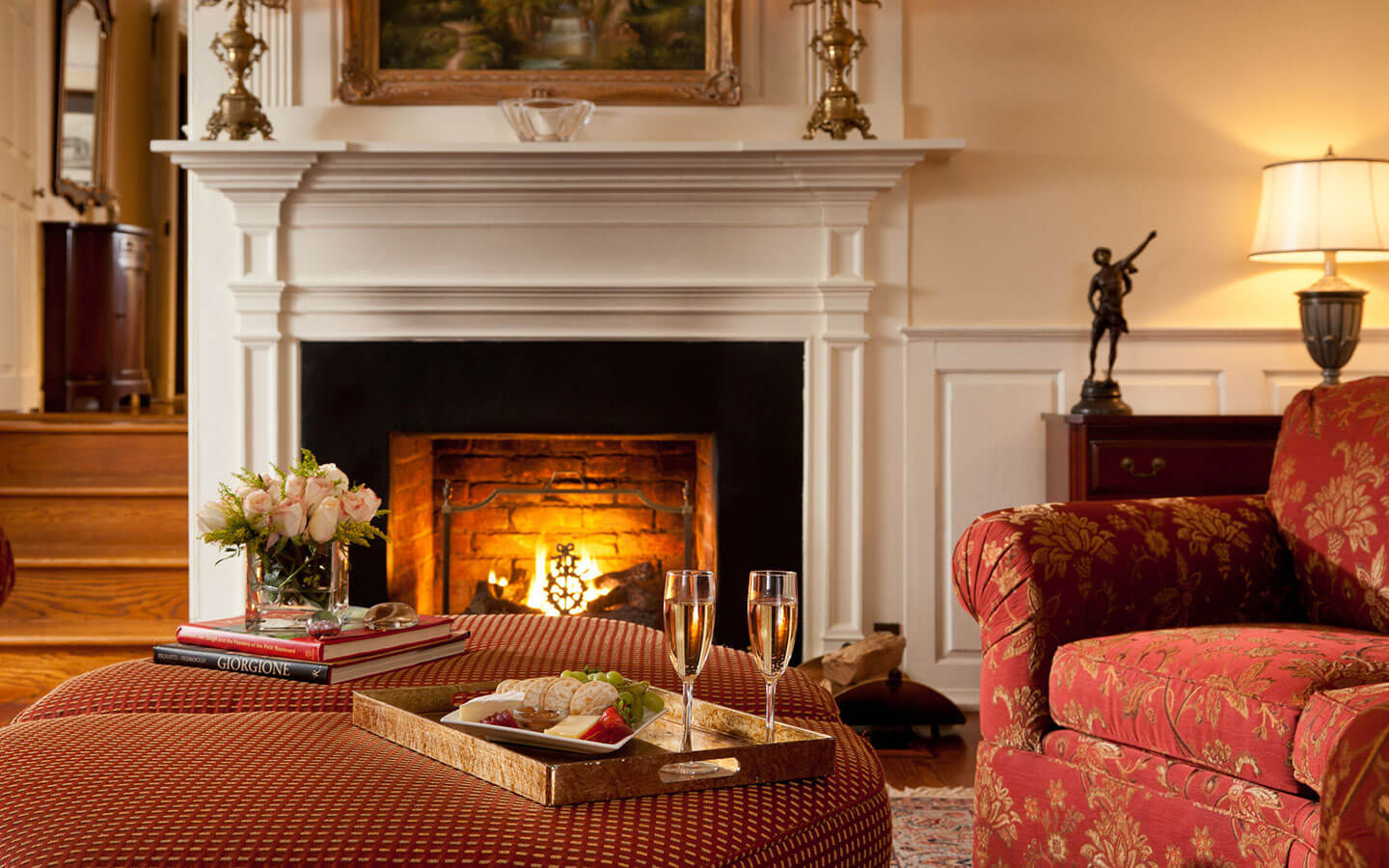 Escape to Virginia wine country at The Inn and Tavern at Meander. Just minutes from James Madison’s Montpelier, and centrally located between Washington DC, Fredericksburg, VA, and Charlottesville, VA, our country inn is a historic destination away from hectic city life. Rest, unwind and enjoy the pleasures of a simpler pace. We invite you to completely relax. Stroll through formal boxwood gardens or wander woods and fields where wildlife abounds. Watch bluebirds flitter from fence to fence or hummingbirds hover around the back porch gardens. Admire horses grazing on the knoll. Cool off with summertime wading in the Robinson River. Bicycle down surrounding country lanes.

Stake your claim on the ever-popular red Adirondack chairs that face spectacular views of the Blue Ridge Mountains. Comfortable chairs and rockers line both levels of the expansive back porches, providing peaceful respites for sipping afternoon tea, reading a novel or watching breathtaking mountain sunsets.

Inside the grand Colonial mansion where 9-over-9 windows look out over old Virginia boxwoods, grand and rare trees, lush gardens and ancient brick sidewalks, you will find plenty of private nooks for reading, writing or quiet contemplation. Or join other guests for pleasant conversation in the parlor where Thomas Jefferson and General Lafayette were frequent visitors. Romantic accommodations are provided in 10 elegantly appointed rooms and cottages located in both the Manor house and other buildings on the property.

The Inn and Tavern at Meander opened in September 1992 after undergoing a year of restoration and preparation. Prior to that, the house had been a private residence since it was built in the 1700s.  This unique property is steeped in history.

Archeologists have discovered a prehistoric native American site on the property near the Robinson River. Their excavations unearthed spear and arrow points and chards of pottery, among other artifacts, dating back as early as 2000 BC.

The farm was patented in 1726 by Col. Joshua Fry, naming it Meander because of the curve in the Robinson River running through. A member of the House of Burgesses and professor at William and Mary, he also served as the commander of the Virginia militia. Col. Fry and his partner Peter Jefferson, father of Thomas Jefferson, surveyed and drew the first official map of the area known as Virginia. Fry commanded the Virginia Militia at the start of the French and Indian War, with George Washington as his second in command. After Col. Fry died from injuries sustained in travel to battle, Washington assumed command of the forces and as they say, the rest is history.

Following Joshua’s death, his son Reverend Henry “Hank” Fry, inherited the property and built the first part of the house naming the property Elim. Henry is buried in the family cemetery located in the field behind the house along with several other Fry and Lightfoot family decedents. His lifelong friend, Thomas Jefferson, visited here often, as did General Lafayette, George Washington, George Mason, and many other patriots. William Wirt, famous 18th Century American lawyer and counsel for the prosecution against Aaron Burr in 1807, spent much of his youth here. At that time, the property encompassed more than 3,000 acres.

During the Civil War, the mansion housed a Union official, Col. Baynard. Numerous important Civil War battles were fought near the property, which is only 4 miles from Cedar Mountain, site of one of the war’s largest and fiercest cavalry battles. Local historians believe the Battle of Cedar Mountain actually began at Meander’s front gates.

The property name was changed back to Meander in the early 1900s by owner George Shearer, who maintained the property as an estate for his daughters, Judith and Julia. They lived their entire adult lives here, and as noted breeders of horses, cattle, and dogs, the colorful sisters are credited with introducing Whippets to America. The Meander Whippet still sets the breed standard.

In 2017, the property was purchased by a group of families and friends committed to preserving the heritage of the property, supporting the local community, and delivering “Meander Moments” for guests. As one of the most historic bed and breakfast on the east coast, it is truly a step back in time.

To reach our Inn, please use our directions below when you arrive in Locust Dale, VA.

Take Interstate 66 west to Rt. 29 South (Gainesville exit).  Follow Rt. 29/15 south to the Orange/Culpeper exit (where Rt. 15 splits from Rt. 29). Travel south, towards Orange, on Rt. 15/James Madison Hwy. for 9 miles. The Inn is on your right, just past the Crooked Run bridge and Meander Run Road. Drive time without traffic: 1 hour, 20 minutes

Take Rt. 29 north out of Charlottesville, towards Culpeper. Turn right on Rt. 230 (Exxon and VDoT station on the corners) and travel until it ends at Rt. 15/James Madison Hwy.  Turn left (north toward Culpeper) and travel 5 miles. The Inn is the first driveway on the left after crossing the Robinson River. Drive time without traffic: 45 minutes.

Take Hwy. 33 east to Hwy. 230/East at Standardsville. Continue until Hwy. 230/East ends at Hwy. 29. Turn left onto Hwy. 29; travel approximately one mile and turn right back onto Hwy. 230/East. Follow Rt. 230 until it ends at Rt. 15/James Madison Hwy.  Turn left (north toward Culpeper) and travel 5 miles. The inn is the first driveway on the left after crossing the Robinson River.  Drive time without traffic: 1 hour, 10 minutes.